Regulatory Recap: The SEC/CFTC Senate Hearing and Expert Takes on the Future of US Regulation

This article by Colin Harper was originally published at CoinCentral.com

The State of Cryptocurrency Regulation in America

US officials have given more ear to the topic of cryptocurrencies and blockchain in the last two weeks than they have since Bitcoin’s creation in 2009.  We’re a little over a week out from Jay Clayton and Christopher Giancarlo’s testimonies before the Senate’s Banking, Housing, and Urban Affairs Committee, and the CFTC’s Technology Advisory Committee already held a public meeting to discuss crypto.  The meeting took place on Valentine’s day, and it resulted in a unanimous committee vote to instate two new subcommittees dedicated to blockchain and cryptocurrencies.

And all of this official attention has US investors and enthusiasts feelin’ the love, or at least, it has them breathing a sigh of relief.  The first of these meetings broke Congress’ silence on the matter, and both are important steps to start clearing the fog of regulatory obscurity that has left crypto-assets relatively undefined on a legal level in the US.

“The testimony from Clayton and Giancarlo presented an optimistic view of the power of financial and technological innovation with blockchain-based applications,” Jason Gottlieb, an attorney with Morrison Cohen LLP, told Coin Central in a statement on the Senate hearing. “They further cautioned investors about the limited protections that the Commissions can offer in certain circumstances. Overall, Clayton and Giancarlo appear to be thinking deeply about cryptocurrency issues, and engaging in the necessary conversations around these burgeoning and potentially economy-changing technologies.”

Coin Central requested comment from both Jason Gottlieb and Anthony Tu-Sekine, two attorneys with experience in concurrency litigation.  They offered some professional insight into the Senate meeting, as well as answered some of our questions about the ramifications of this meeting for future regulation.  But before we get to those comments, first, let’s take a look at some of the notable points of last week’s meeting.

The Senate Crypto Meeting: Some Takeaways

CFTC head Christopher Giancarlo came out of the meeting looking like a cheerleader for the crypto community.  One of the more optimistic proponents of crypto and, especially, blockchain technology, he even referenced HODLing in his remarks.

He mentioned that his niece has been a long time holder of Bitcoin, and he stressed that regulators owe it to the younger generation to treat crypto like a legitimate commodity to protect their interests.

“We owe it to this new generation to respect their enthusiasm for virtual currencies, with a thoughtful and balanced response, and not a dismissive one…we must put in sound regulatory frameworks to reduce risks for consumers.”  Part of this framework will include a crack down on malicious actors to protect consumers:

“We intend to be very aggressive, if nothing else, so that people like my niece can have some security that there aren’t fraudsters and manipulators out there—and there are a lot, too many, far too many of them.”

I was an early investor in cell phones back in the '80s, and I believe #blockchain has the potential to be just as transformational as cell phones. As our government begins to look at #crypto, I don't think you can separate #cryptocurrencies from the technology they're based on. pic.twitter.com/EneUMfcgJ3

Both Giancarlo and Clayton acknowledged their respective agency’s limitations in accommodating these regulations.  Clayton stuck to his script that “every ICO [he’s] seen is a security” and the SEC regulates them as such, and Giancarlo admitted that “the CFTC does not regulate the dozens of virtual currency trading platforms [in the US] and abroad.”

Senator Crapo responded to these remarks by asking, “whether [either agency] has sufficient jurisdiction” and whether “Congress should consider revising and refining [its] financial law so that one agency or a group of agencies have complete jurisdiction.”

“To be very direct,” Clayton starts, “we should all come together–the Federal Banking regulators, the CFTC, the SEC, there are states involved, as well–and have a coordinated plan for dealing with the virtual currency trading market.”  He also believes that Congress “may” need to rewrite financial law if necessary, but that regulators will need to evaluate the situation more thoroughly before reaching this conclusion.

Giancarlo agreed on both fronts, continuing to say that “the first step is to recognize where the gap is.” As it stands, the gap for the CFTC is not being able to “set the standards for [cryptocurrency spot markets]” (i.e., non-futures exchanges), while the SEC is limited to regulating ICOs and tokens that are securities.

Senator Warner echoed these calls for collective regulatory efforts, arguing that “[we] may be on top of something transformational,” believing that, given the exponential increase of the cryptocurrency market, it could be “north of $20 trillion by 2020.”

“The potential writ large amongst crypto assets and the underlying blockchain could be as transformational as wireless was years ago,” Warner espoused. “I think we’re going to need a much more coordinated effort.” 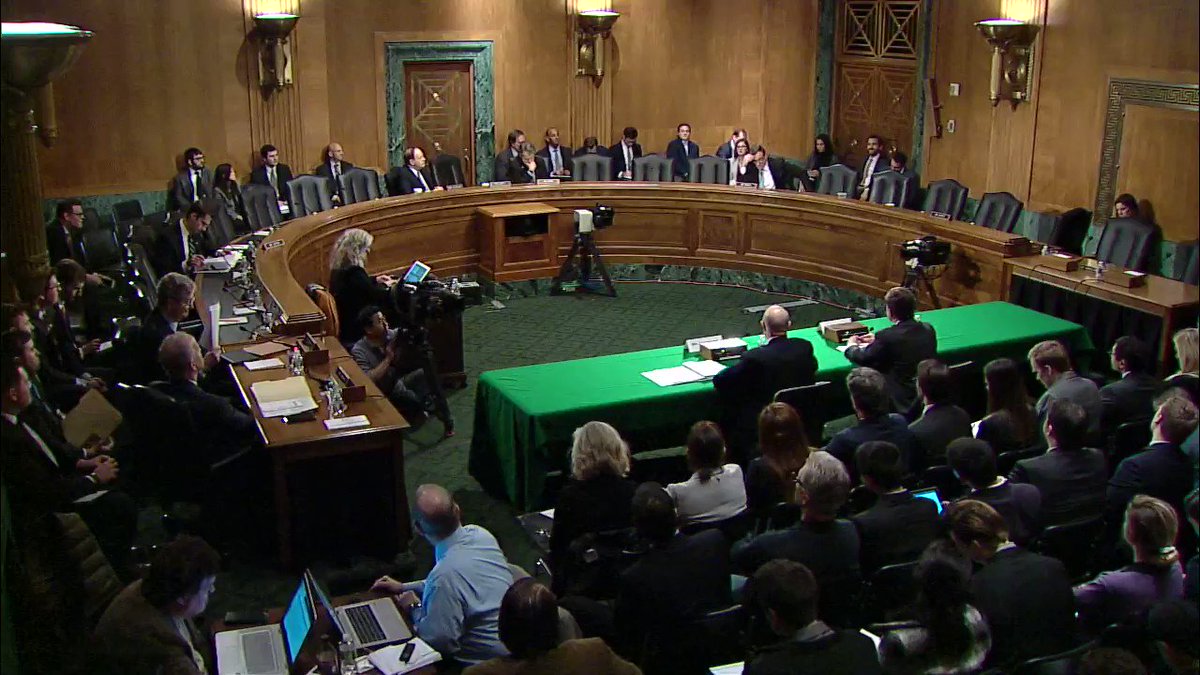 Warner was not alone in his sentiments.  Generally, a note of optimism rang throughout the meeting to sing blockchain’s praises, as both Giancarlo and Clayton believe that the technology is more than mere novelty.

“I think this distributed ledger technology has enormous potential. Now how it will be realized, when it will be realized are challenges, and those we can’t say,” Giancarlo said.  Clayton, while cautious of the market’s current value, stated, “I hope people pursue [blockchain] vigorously.”

What All This Means for the Future of US Regulation

Coin Central reached out to Jason P. Gottlieb of Morrison Cohen LLP and Anthony Tu-Sekine of Seward & Kissel LLP for comment on the hearing.  Both attorneys offered some insight on the topics discussed, as well as what we may see going forward.

How to Approach Exchanges

In their testimonies, both Clayton and Giancarlo admitted  that their agencies don’t have regulatory reign over exchanges.

“Cryptocurrency exchanges are currently regulated as money-transmission services, with licenses granted on a state-by-state basis,” Gottlieb told Coin Central.  “I cannot imagine the SEC and CFTC are eager to allow states to compete in a regulatory “race to the bottom” (as the federal regulators would see it), allowing a state to win business by being exchange-friendly but investor-protection weak.”

Tu-Sekine agrees with Gottlieb’s sentiments, stating that “this is one area where there could be [increased federal] legislative or perhaps regulatory action, perhaps similar to Japan which has imposed capital, operational and security requirements on cryptocurrency exchanges.”

During his testimony, Giancarlo held that “what’s so challenging about Bitcoin is that it has characteristics of multiple different things.”  As a means of exchange, it acts like a currency, while as a store of value, it acts like a commodity, he argues.  Meanwhile, Clayton makes the argument in his testimony that ICOs (and their tokens) should be treated as securities.

Tu-Sekine believes that no “U.S. regulator would be willing to declare any crypto asset to be a currency, which is a term generally used for an instrument that is legal tender.”

“For U.S. purposes, crypto assets are either commodities or securities,” he continued, adding that he does “not expect to see any other type of classification to emerge from these two regulators.”  For securities,  Tu-Sekine thinks that “existing tests like the Howey test will be used to determine what is or is not a security.”

“We are very likely to see a classification system emerge in the next few years, but I fear it may be out of a hodgepodge of case law, rather than a system of formal regulations,” Gottlieb responded to our question on the subject.  This would likely come from a slew of court cases where ICO issuers challenge their token’s classification as a security.  The SEC is unlikely to budge from its “position that all tokens are securities,” Gottlieb believes, so it’s likely that the “unfortunate result will be that a more accurate classification system will take longer, be more idiosyncratic, and necessarily include an element of regulatory overreach as to those tokens that are eventually found not to be securities.

Gottlieb did indicate that he “would not be surprised to see courts conclude that particular tokens are not securities, depending on the facts and circumstances of that token.” From these potential decisions, “we may see the outlines of a taxonomy emerge.”

The Next Step for Regulation

When asked what US citizens can expect next for the expansion of crypto’s regulatory landscape, both attorneys said that they see a long, slow march towards comprehensive regulation that will be led by the SEC and CFTC.

“The SEC and CFTC are likely, in the near-term, to take a “regulation by enforcement” approach. The laws and regulations are well-known and understood, and to the extent industry participants are violating those rules, enforcement actions will follow. We have already seen this happening,” Gottlieb stated.

“Medium-term, a task force convened by Treasury Secretary Mnuchin is examining whether new regulation or statutory authority is necessary,” he added, while concluding that “any statutory or rule-making process will be a long-term project.”

Tu-Sekine espoused a similar viewpoint.  He and his firm “do not expect a huge push to promulgate new regulations,” continuing to say that “even if there was such a push, any new regulation needs to go through the required process including public comment and that is not a quick process.”

A How-To Guide To Breaking Into The NFT Marketplace

4 Worst Things You Can Do When Buying NFTs