With a growing number of challenger banks taking on the U.S. market, one of the original startup banks, Simple — now owned by BBVA — has taken the unusual step of removing a core banking feature: bill pay. The company claimed the feature was under-utilized and usage was trending downwards, which is why it decided to sunset the option to pay bills through its app. That decision, not surprisingly, has angered a number of customers who are taking to social media and online forums like Reddit, threatening to switch banks as a result.

It’s likely true that fewer people today use bill pay than in the past.

The feature is something of a holdover from an earlier era before electronic payment options and auto pay became as ubiquitous as they are now. And many customers may still have bill pay set up even though another electronic option has since become available. Or they may not want to take the time to reconfigure things, when what they have works.

But despite bill pay’s waning usage, it’s odd to shut down such a commonplace banking feature. It’s rare to find a bank that doesn’t offer bill pay services, in fact, outside of a handful of smaller up-and-comers that aren’t full-service banks.

Even most of the newer U.S. fintech players like Chime, Qapital, SoFi Money, Varo, Aspiration and others offer bill pay services where they mail a check for you. And it’s common among more traditional online banks like Ally, as well.

Removing bill pay also greatly impacts those who pay their rent by way of a mailed check, as many landlords are not set up for electronic payments. This is a recurring complaint among the customers who are lambasting Simple for its decision.

Instead, these customers will now have to purchase Simple’s newly available paper checks (sold in packs of 25 for $5 — oh, what a timely launch!).

They’ll then need to buy stamps, address envelopes, fill out checks and actually mail them.

Postal mail, of course, is not preferred by today’s younger generation — many of whom never had to write letters, having grown up in the internet age. Millennials have even complained that the very act of having to mail things gives them anxiety, due to all the steps involved and their overall unfamiliarity with the process.

We know it may seem like we are taking a step back in time, but when you use online bill pay, you are technically sending a check to the recipient. Paper Checks will put you in control – we will make sure your funds are safely tucked away, and ready to use via Expenses. ^RC

I use bill pay to support a family member.

You’re saying “paper checks will put me in control” but really what that means is that I now have something that previously was automatically handled and no I have to manually do it.

I was in control prior, you’re just taking it away

Considering that banks like Simple are targeting the millennial customer, forcing them back to checks they have to mail themselves is not the smartest move — at least from a public relations perspective.

On top of all this, Simple’s announcement about the discontinuation of bill pay was not well-communicated. As it touted the arrival of paper checks, an email footer also quietly noted that bill bay would also shut down after July 9, 2019. Customers dinged Simple for its lack of transparency.

How many checks would a checkbook check if a checkbook could check checks? Well, 25 checks to be exact. What does this mean? It means paper checks are officially here!! Get yours for $5 right in the app or online.

In the spirit of transparency, @simple should also let its users know that Bill Pay is going away. Proof here (from an email from them) pic.twitter.com/LuDmnHJIA2 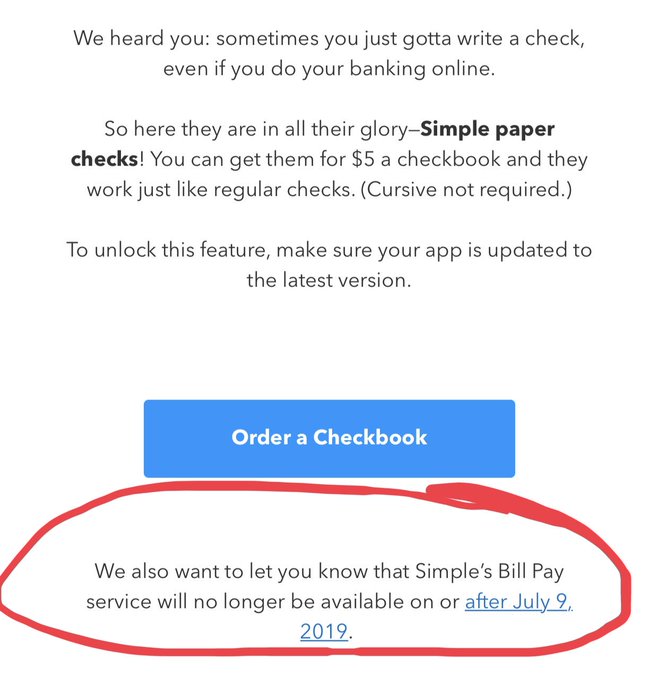 The company claimed it was sending emails about bill pay to customers — but many didn’t receive any message before learning of the change on Twitter. And they were angry.

Since the decision was announced, Simple has been dutifully responding to customers’ complaints on Twitter, sometimes with smiley emojis and cheerful customer service-ese, like: “We hear ya. Mailing payments for bills can be nerve wracking.”

The company even wished one customer well on their journey to find another bank.

We hear ya. Mailing payments for bills can be nerve wracking. Is it possible to make payments through your biller? If so, Expenses are a good option to make sure you always have the funds you need. We’ve got some info on how to set up both over here: https://www.simple.com/help/articles/payments-and-transfers/simple-bill-pay … ^EP

I’m switching to @Aspiration because of this. I really hadn’t planned on switching banks at all, but I feel like I’m left with zero choice due to this poor decision. My feedback is you should provide paper checks and online bill pay. I hate to leave but what is another option?

We do now offer paper checks for folks who want them, and many of our customers set up automatic withdrawals from the biller’s websites for their bill payments. But if you decide to look for a new bank partner, we wish you the best.

In addition to declining usage, the company said its newer Expenses feature was not working well with Bill Pay, which was another factor in its decision.

So it was because of low usage not because you are trying to make it better for those that used bill pay, right?

Good question – both are true. We knew that our existing bill pay process wasn’t working well with our expenses feature, so combined with the low usage rates we decided to end it. Hope that helps to clarify! ^BC

Predictably, the volume of customer complaints has led to the creation of a Change.org petition.

Things are now going so badly that Simple just sent customers another email in response to all the backlash. In it, the company acknowledges how unhappy customers are about its decision and its handling of the news.

“To be completely transparent, a really small percentage of our customers use Bill Pay,” the email reads. “With this service’s usage declining, we made the decision to sunset it. This allows us to use those resources to build new features that benefit a broader number of customers. We know that some of you aren’t happy about this decision or how we broke the news, and for that, we’re sorry.”

The decision, however, still stands. [Simple told us after publication that less than 3% of customers use bill pay,]

Simple was one of the original innovators in online banking. But after its acquisition, the pace of innovation has decreased and customer growth has stagnated. Over the years, the company has been maligned for not allowing non-U.S. citizens to sign up and for shutting down customers’ accounts with little notice, due to transition issues.

Now it’s angering customers again just as a number of new, millennial-focused online banks are hitting the market — and as challenger banks from Europe, like N26 and Revolut, are preparing to make the jump to the U.S. That may not be the best time to send a core group of users in search of alternatives.

The full email sent to customers is below:

You probably heard this already but if you haven’t: Simple’s “Pay a bill” and “Mail a check” features (also known as “Bill Pay”) are going away on or after July 9. If you have a payment scheduled on or after that date, it will not be paid or sent.

To be completely transparent, a really small percentage of our customers use Bill Pay. With this service’s usage declining, we made the decision to sunset it. This allows us to use those resources to build new features that benefit a broader number of customers.

We know that some of you aren’t happy about this decision or how we broke the news, and for that, we’re sorry.

We’ll continue to be in touch over the coming weeks. In the meantime, if you have any questions, we’re reachable via a support message or at (888) 248-0632.

— The Team at Simple

We made the decision to sunset our current form of bill pay because of low customer use and its popularity is declining. Retiring it allows us to shift the resources toward new features. However, this doesn’t mean that the small percentage of our customers who use bill pay don’t matter- they do. So far, we’ve seen our customers use a few different solutions. Most are setting up autopay with their billers directly. Some are using an independent bill pay provider. For those with billers who don’t take a digital payment, we have paper checks, although we understand that isn’t the most convenient solution for everyone. We also know that our first set of communications regarding the sunsetting of bill pay missed the mark, and for that we are very sorry.

Fund transfers now made easier and faster with Tonik via InstaPay