Rakuten, the Japanese ecommerce company, is betting on the rising digitisation of cross-border payments by leading an investment in Azimo that values the fast-growing British financial technology company at several hundred million dollars.

Azimo, which is based in the UK and has its technology team in Poland, is one of several companies challenging traditional remittance providers like Western Union and MoneyGram by offering consumers a cheaper and faster way to send money overseas. Instead of taking cash into a high street store to send money to friends and relatives overseas at an overall cost of about $8 for every $100 transmitted, digital upstarts are being used by increasing numbers of people to send the same amount for as little as 50 cents.

Azimo, which competes with companies such as TransferWise, PayPal and WorldRemit in the digital payments market, more than doubled the value of transactions it handled last year to more than $1bn and has more than 1.5m registered customers. “It is the same trend that is causing the banks to close their branches,” said Michael Kent, who co-founded Azimo six years ago. “I have no doubt that Western Union and MoneyGram will disappear as a high street presence.”

Consumers send $600bn of international remittances every year, of which Europe is the largest market at $165bn, according to McKinsey. “The large groups have 10 to 15 per cent market share, and I don’t see why we can’t get close to that level,” he added. 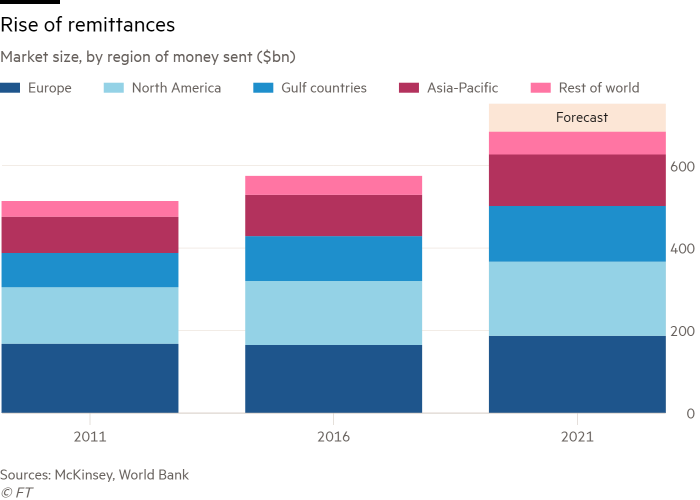 Rakuten Capital, the investment arm of Japan’s biggest ecommerce group, led the latest $20m investment in Azimo, which took the total raised by the company to $50m. The injection is expected to help the group through to its break-even target of next year. There has been a frenzy of dealmaking in the payments industry in the past year, underlining how the growth of digital money transmission has attracted investors.

PayPal announced this month that it had agreed to acquire iZettle, a Swedish rival, in a $2.2bn deal. “I would assume that there is a trend for consolidation, and I think we have seen this across different parts of payments,” said Oskar Mielczarek de la Miel, managing partner at Rakuten Capital. “So these are becoming very coveted assets.”

Last year, Vantiv of the US acquired Worldpay of the UK for £9bn, while private equity investors Blackstone and CVC bought Paysafe for £3bn. In January, a proposed $1.2bn bid for MoneyGram by Ant Financial, the digital payments affiliate of China’s Alibaba, was ditched after failing to win approval from a US foreign-investment panel.

Mr Mielczarek de la Miel said Azimo could make an attractive acquisition target. “For a lot of fintechs the exits tend to be in the form of a trade sale, versus a public offering, which tends to be more rare,” he said.

Other investors participating in the latest fundraising at Azimo include Frog Capital, e.ventures, GR Capital Partners, MCI, Quona, Greycroft Partners and Silicon Valley Bank. Rakuten has invested in several fintech companies around the world including Currency Cloud and Everledger in the UK; BlueVine, Acorns and Insikt in the US; and Kreditech, Simplesurance and Dacadoo in Europe.

A How-To Guide To Breaking Into The NFT Marketplace

4 Worst Things You Can Do When Buying NFTs

How to Create an NFT Art Marketplace: A Detailed Guide

How to Start a Career in Fintech