FinTech in China: A 53-Point Summary

By Gaurav Sharma for LTP

If there is a FinTech version of Silicon Valley, it is China, Period. Today, there is no equivalent of China in the FinTech world. Having spent the past several months in China, here are some observations/insights from the FinTech scene in China:

1. China is the world’s largest FinTech market. In 2015, its market size of Internet finance was greater than $1.8 trillion.

2. China is a global leader in every aspect. The country has taken in some of the largest chunks of global investment.

4. Innovation, assets & borrowers, operations and regulation have catapulted the growth of the Chinese FinTech market.
5. China’s Internet ecosystem cannot be underestimated and replicated. Factors contributing to China’s FinTech success include:

7. China’s dominance in FinTech is down to its Internet giants, also known as BAT (Baidu, Alibaba and Tencent), all of which are at the core of China’s FinTech revolution.

10. As the third-party payment and financial products run on third-party rails, banks do not see or touch the transactions.

11. Alibaba, for example, has more than 420 million customers who have provided the company with behavioral data for years. In comparison, National Credit Bureau, run by PBOC has data on only 300 million people, i.e., less than 25% of the total population.

13. The Chinese didn’t inherit the web browsing habits of most Americans. Mobile is now “the entry point for client acquisition strategies.”

15. The sort of innovation that is happening in China is much more sophisticated than any developed market.

17. Tech and platform companies with transactions data and proprietary ‘rails’ are winning the game.

19. The triumvirate of “BAT” are present everywhere – in payments, lending, banking, insurance, investment.

20. China is dominating the FinTech space because its Internet giants got in on the ground floor when it came to developing e-commerce third-party payments.

21. The “BAT” companies – Baidu, Alibaba, and Tencent – control about 80% of the Chinese mobile payments market. Payments are the foundation on which many other financial applications are built. Alibaba’ s Alipay takes about half the market, and Tencent’s Caifutong takes nearly a fifth.

22. On the other hand, domestic incumbent banks continue to struggle with their “relatively undeveloped systems.”

23. The biggest FinTech startups are in payments and lending, which account for nearly 80% of the combined value of all unicorns.

25. UnionPay, Alipay and WeChat Pay can also be used for point-of-sale (POS) payments

26. Alipay is ubiquitous in China. It processed~ 70% of all mobile payments in the country and 3x as many transactions as PayPal did ($931B/$232 B) in 2015.
27. Over 800 million people use Tencent’s various applications for daily communication and payments and wealth management.

28. Wealth Management is another big category. Baidu’s RMB 3 billion big-data based mutual fund was sold out within three days of launch in 2014.

29. AntFinancial’s Yu’e Bao is now third-largest money market fund in the world with ~$125bn AUM – all in a span of three years. Other leading players are Tencent’s Licaitong and specialized wealth management firms such as Noah and Hang Tang. 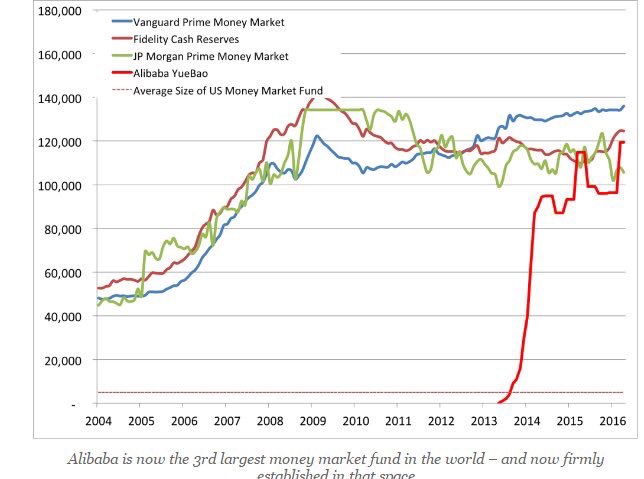 #Alibaba now 3rd largest money market fund in the world with ~$120bn AUM , all in a span of 3 yrs. #Fintech #yuebao

30. Competing in China is tough and all the more harder if you have to compete against BAT.

31. China also has a very high savings rate (30%), so local banks have plenty of cash but most do not have the systems and processes to do consumer lending profitably at scale.

32. In the past 10 years, China’s growth story is fueled by massive debt creation.

33. In financing, major contributors to the value chain are supply chain financing, consumer financing, P2P lending and crowdfunding. Lufax is the largest P2P lender, with a valuation of $18.5 billion; there is also Jiedaibao which is backed by JD Capital.

34. China is also the world’s biggest P2P lender, thanks to Tencent/WeChat. In 2015, registered P2P lenders originated ~ $60 billion consumer &~40 billion business loans. Between 2012–15, there was a huge spike in P2P lending due to the dual financial and monopolistic banking system and pent-up demand by borrowers and lenders.

36. After that, there was a nationwide crackdown as authorities slam on the brakes in the wake of financial scandals involving billions of yuan.

37. Weak P2P platforms are dying out slowly and this wave of “cleansing” and “consolidation” is likely to continue for the next 12–18 months.

38. Although regulatory scrutiny is increasing, Chinese officials have thus far been more liberal than other markets. Chinese regulators are easing restrictions that currently hamper commercial banks’ investment into technology enterprises.

39. The China Banking Regulatory Commission (“CBRC”) came out with recent guidelines in August 2015.

40. “Data is the new gold,” and all major internet finance companies are participating in this gold rush. A “new” market creation (without FICO/bureaus) is in progress.

41. China is also planning to develop a far-reaching social credit system by collecting information online and providing all its citizens a score.

42. There is no doubt that China’s FinTech is changing how the world thinks about banking.

43. Observing payments and lending solutions in the West, no contender offers the versatility and comprehensiveness of Alipay or WeChat Pay as of now.

44. The market has mostly leap-frogged tech from cash straight to “mobile and digital.”

45. Large payments companies have already begun to position themselves for success “outside borders” through equity or strategic partnerships. For e.g., AntFinacial’s recent investments in Thailand’s Ascend Money, and India’s PayTM, and their partnership with First Data in US and Ingenico in Europe.

46. Most of China’s 1 billion have no affiliation with a bank and will access financial services for the first time through an Internet company.

47. Until recently, the banking industry has been 100% state-owned. The Tencent-backed WeBank (purely Online), for example, is the country’s first private bank. Weilidai – the lending app that is embedded in WeChat – has proved to be a game changer. ZhongAn is a 100% online Chinese insurance company backed by leading companies such as Alibaba and Tencent.

48. As we shift from “ownership” to “access” economy, the debt profile of new generation will differ dramatically from the previous generation.

49. The technology sector now makes up 30% of the MSCI China Investable Market Index. It was 7% of the index three years ago.

50. Together, Baidu, Alibaba and Tencent companies dominate China’s internet ecosystem and generated $39 billion of revenue for the 12 months ending June 30.

51. When it comes to financial technology or FinTech, China is a world leader in every aspect. The country has taken some of the largest chunks of global investment in the sector and is adopting the technology faster than anywhere else.
52. With almost 700 million internet users, a growing consumer economy, and world-leading technology companies, there is enormous scope for the FinTech sector to fundamentally transform China’s economy.

53. Unsurprisingly – “Saving/Making people money” has been the driving force behind many of the biggest consumer wins of the Internet era.

The Six Advantages of Fintech

ByteDance Pushes Into Payments With Help From J.P. Morgan